As most Liberians lack the money and means to access conventional mass media, this chalk-written daily “newspaper” is the most widely read report in Monrovia.

Alfred Sirleaf is a one man newsroom. Mr. Sirleaf (also known as the Blackboard Blogger) is the Director of Daily Talk, a news kiosk in Monrovia, Liberia – located in West Africa. Every morning at 7:00 A.M. he updates the public on the latest big stories in the city – chalked up on a series of blackboards. He collects and reads local newspapers daily, and uses his mobile phone as the major form of communication between him and his estimated 10,000 daily readers. Mr. Sirleaf believes that “People need information, but many are too poor to buy newspapers and have no electricity to access Internet media or TV.”

Behind the folding three panel chalk board is a small “News Room”. In the News Room Mr. Sirleaf can work on the next set of news while viewers read the current set by means of utilizing a rotating double sided chalk board. 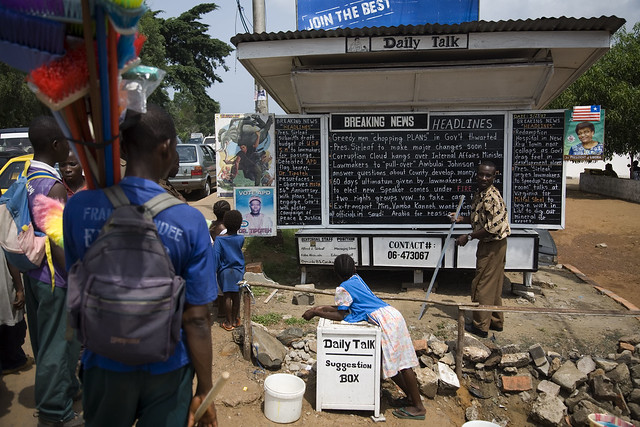 The Daily Talk is free to read and is funded by occasional gifts of cash and pre-paid cellphone cards. It even has its own suggestion box for readers and followers.