Emma Read was issued a United States Patent in 1923 for her design of The Portable Baby Cage. Read the original patent application with drawings HERE.

“They were designed in a more innocent age and with the best of intentions. These incredible pictures taken in the 1930s show babies suspended high up in flats from their parents’ window. Sitting in open mesh cages, the youngsters were completely exposed to the elements outside. Incredibly, the then East Poplar borough council in London proposed to fix the cages to the outside of some of their buildings so that babies could benefit from fresh air and sunshine. The cages were also distributed to members of the Chelsea Baby Club who lived in high buildings and had no gardens. The benefits were said to be fresh air for the child, room to play with toys and another place for children to sleep. The cages were also designed with a slanted, overlapping roof which was said to protect babies from snow or rain.” [Source: The Oddment Emporium] For centuries, a unique breed of fishermen has been catching monster catfish with their bare hands in the rivers and lakes of Oklahoma. Today, the tradition of “noodling” still has Okie anglers hooked – the noodler motto is No Hooks, No Bait, No Fear. Once a year, competitive noodlers and handfishers meet in Paul’s Valley, Oklahoma for the world’s largest noodling contest. Pictured here are some of the 2011 contenders, along with their prize catfish. Wowzers! All images are by photographer Matt Rainwaters (see his full collection of Okie Noodling images HERE).

This free App from BBC America is so clever – visit Mugshot Yourself to meet some of 1864′s greatest rogues, then become one yourself. Upload a photo of yourself, try your face on different mugshots, and then add the best of them to their growing collection of New York’s most notorious. The folks at BBC America are hosting Mugshot Yourself to celebrate their new television series, “Copper” , which premiers on August 19. 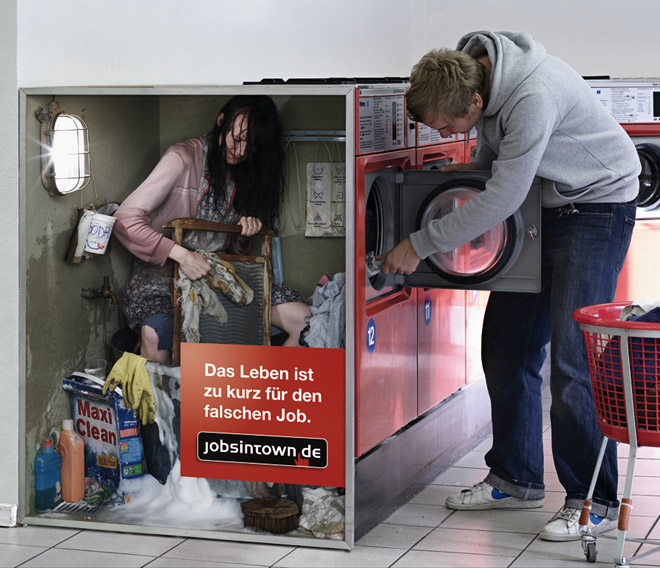 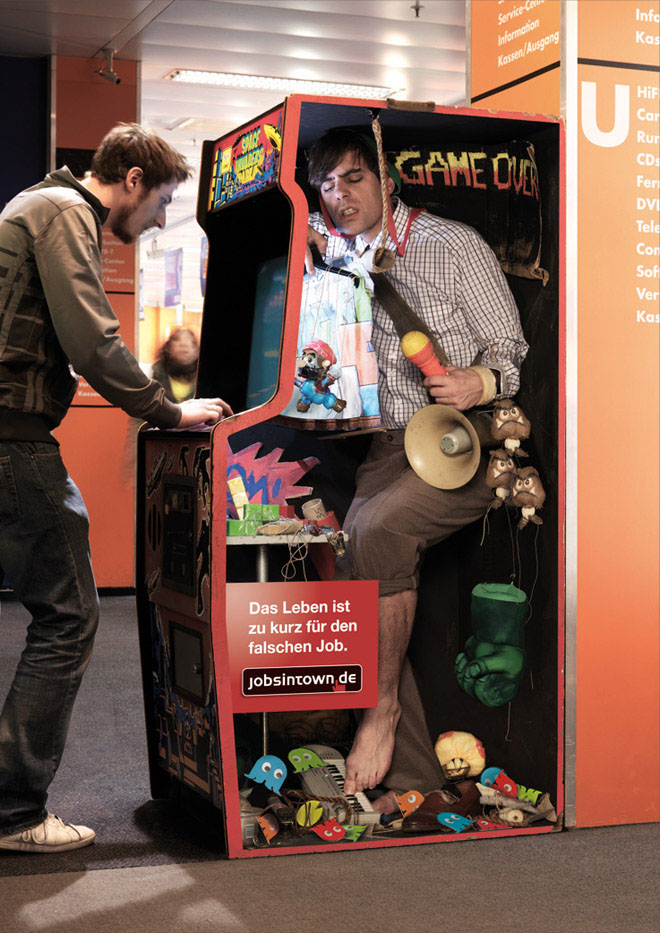 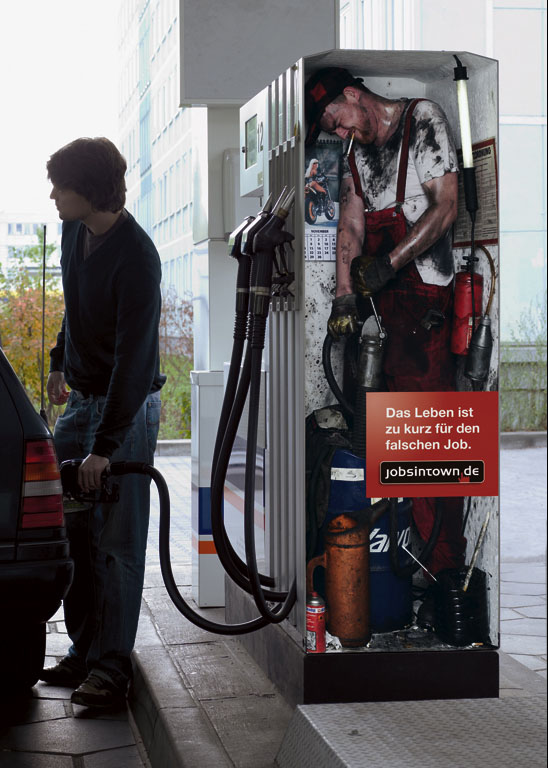 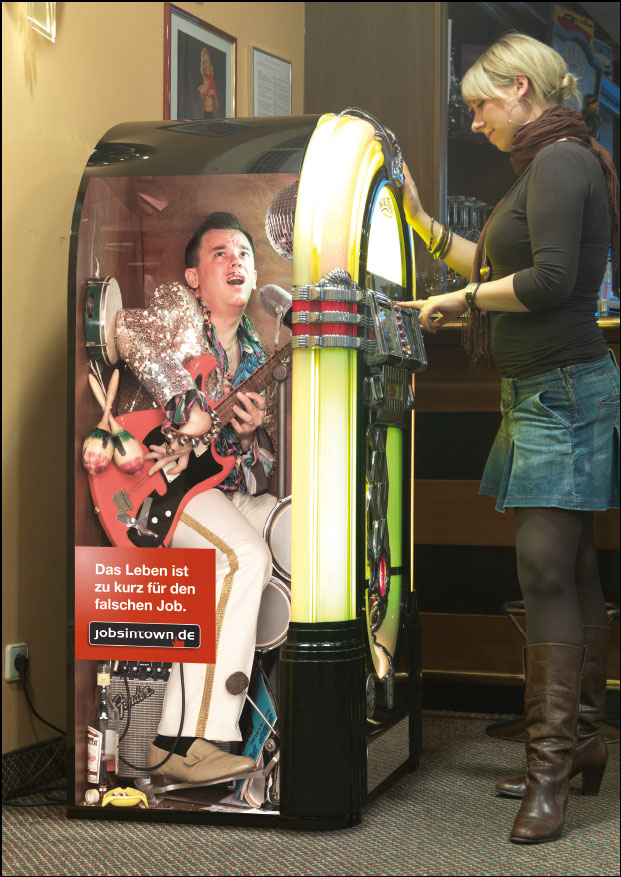 [Images are by Jobs In Town, a German staffing agency, who created these imaginative advertisements for their marketing campaign titled "Life's too short for the wrong job".]

Photographer Haibo Yu is one of the most prominent documentary photographers in contemporary China. Mr. Yu captured these intriguing images of the Dafen Oil Painting Village where the workers often paint, eat and sleep in their small studio spaces. This small town in China is widely known for its industry of mass replication of masterpieces and popular oil paintings:

One traveler’s account: “On my recent travels to China I visited Dafen painting village; A small village near the Guangzou district that produces an estimated 60 percent of the world’s cheap oil paintings. The village exports about five million paintings every year; with artists producing on average around 30 paintings a day. The majority of these paintings are copies of the old masters, just produced faster, cheaper and, in many ways better. The streets are crammed with Van Goughs, Monets and Mona Lisas, most of which will set you back a mere 50 Euros. It has to be seen to be believed.”

Representing the Abomey dynasty, Joseph Langanfin is the president of CAFRA, the council of Abomey’s royal families. With this title, he is considered as the official representative of the kings of Abomey. He presided at the centenary ceremonies for the death of King Glele, who was his great grandfather.

One day, Adama who was also called Modibo, heard that a great Marabout (Moslem leader) by the name of Ousman Dan Fodio, had proclaimed the Jihad (holy war) in Gobir and the Hausa country. At Adama’s death, his immense territory became Adamawa, which actually covers a part of south-west Nigeria and all of northern Cameroun. Today the Lamido has sixty children, and is the chancellor of Amadou Bello University at Zaria, one of the most prestigious universities in Africa.

Six hundred years ago, Olowo, the King, fell in love with Orensen, a very beautiful woman. Unfortunately for the King, she was a goddess who could not live with a human. She was forbidden to see women pounding spices, draw water, or throw a bundle of wood to the ground. Because of his love for the goddess, and in order to marry her, the King promised her that his other wives, in front of her would follow these same restrictions.
After several years, the King’s wives became jealous and revolted. They did everything they were not supposed to do in front of the goddess, who then cast a spell upon the entire kingdom. The goddess promised that people of Owo, would die of famine or sickness if the King and his chiefs did not celebrate every year a ceremony in her honor. The drums should beg her pardon and sing her praises. One also had to offer her a sacrifice of a man and a woman. This ceremony, Igogo, still exists, but the human beings have been replaced by a sheep and a goat.

The Fon (King) is the brother of courageous and powerful animals. At night, he has the power to transform himself into a panther, where he haunts the forest, runs through the savanna and drinks from torrents. When a panther is killed by a hunter, the Fon from Bamileke region are afraid. Will one of them not perish from the death of his double.
Formerly a chief administrator and cabinet chief for the finance Minister of Cameroun in 1964, Kamga Joseph is the thirteenth Fon of Bandjun. On the day of his predecessor’s funeral, he was stopped in the Bandjun market by two Bamileke chiefs, “the hangmen”, in the middle of the nobles and princes who wept the deceased King. Wearing a head dress made of sisal as a sign of humility, he was taken to the noblemen, the “tafo meru”, where he learned during nine weeks how to be a King.

Halidou Sali, the twelfth Lamido (king) of Bibemi, received his kingdom in 1958. He is a descendant of Aido Samba, one of the 42 Kings of Adamawa, who during the eighteenth century carried the flag for the Jihad (holy war) of Ousman Dan Fodio.

The Nyimi Mabiintsh III is fifty years old. He acquired the throne at the age of twenty. As a descendant of god the creator, the king is attributed with supernatural powers. Due to his top position he is restricted by several constraints: he does not have the right to sit on the ground, and he cannot cross a cultivated field. Apart from his cook, no one has seen him eat. Moreover he never travels without him, and his personal cooking utensils.
It took Laine three weeks to photograph the Nyimi (king) of the Kuba in his royal apparel, the “bwantshy”. The outfit made out of material stitched with beads and “cauris” (small shells used as money in Africa), weighs 160 lb. It takes more than two hours to dress the King, and two days of spiritual preparation to be sufficiently purified in order to wear the outfit. The weight and the heat of the bwantshy is such, that it is impossible to wear it more than one hour. The preceding King had only worn it three times during his entire life.

A graduate from the University of London and an economic advisor for the Ghanaian administration, The King of Akropong holds for the last sixteen years the “sacred seat” of the Akuapem-Asona, one of the seven major Akan clans. To his right, his “spokesman” carries the royal emblem, the elephant, a remembrance that his kingdom was founded by force.

The Baba (sultan) of Rey-Bouba rules over fifty five thousand subjects, and his territory is as large as Belgium and Luxemburg reunited (35 000Km2). It is wrong to call him Lamido, because he was never a vassal to Sokoto. A former parliamentarian in the Camerounian Assembly, Bouba Abdoulaye had to leave everything and renounce modern life in order to succeed his father.
His great-grand father, Bouba Ndjidda came from Mali in 1799, with his Fulani warriors, and decided to settle on the borders of Adamawa, at the edge of the Mayo-Rey river. He placed a white flag, a silver drum, a sword and a basket containing the royal secrets, and built a palace with a surrounding wall that was 800 meters long and seven meters high.
Today these walls shelter one of the most traditional sovereigns of Africa. He exercises an invisible and permanent power. He is only allowed to go out three times during the year. The Baba is the center of the world and the kingdom. He knows everything, and has to know everything. Hundreds of agents keep him informed of all the movements and acts in his kingdom.

Eighty years old, the sultan Njoya has been on the throne for more than fifty years. At the age of twenty-nine, he inherited the famous Bamun throne, founded in the sixteenth century. He was chosen, by the kingdom’s council of wise men, among one hundred and seventy-seven of his father’s children, the famous Sultan Njoya.
His father, an enlightened sovereign, spent twelve years to invent his own alphabet, made of eighty symbols. He wanted to be able to write in the Bamun language the kingdom’s history. At this time, the oral tradition dominated. In 1913, while Cameroon was still a German colony, Sultan Njoya equipped himself with his own printing house.

The Emir of Katsina is a passionate follower of polo, and his family has contributed many champions to Nigeria. In the twelfth century, Katsina was a Hausa village, governed by the Durbawa, which was a royal dynasty that had emigrated from a region whose name tradition has lost. One of the Durbawa kings, Janzawa, married a Daura princess from another Hausa state. The Queen Katsina, gave her name to the village which became the terminal of the commercial transsaharien route from Tripoli (Lybia).

On March 23, 1979, prince Salomon, a graduate of Cambridge University, was crowned Oba (king) of Benin. He succeeded his father Akenzua II, and became the thirty-eighth king of a dynasty dating back to the thirteenth century. “The large chalk stick is broken”, was the metaphor used to officially announce the death of Akenzua. Immediately afterwards, the Edo of Nigeria, England and America, shaved their heads. The new growth of the hair signified the rebirth of the kingdom, and the re-establishment of the harmony between man and the elements, that had been broken for an instant by the death.

Find more photos at Design You Trust.
Photos via LifeLounge.

Fashion: a distinctive; however, often-habitual trend in a look and dress up of a person, as well as to prevailing styles in behavior. Cartoonist Joana Avillez illustrates a few “larger than life” trendsetters in the modern fashion scene: 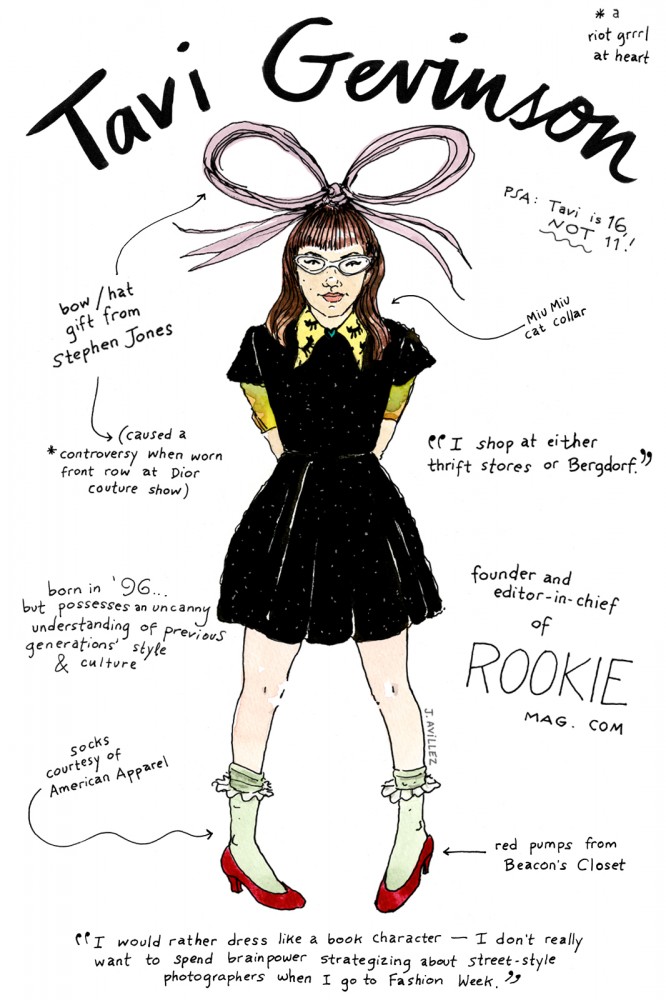 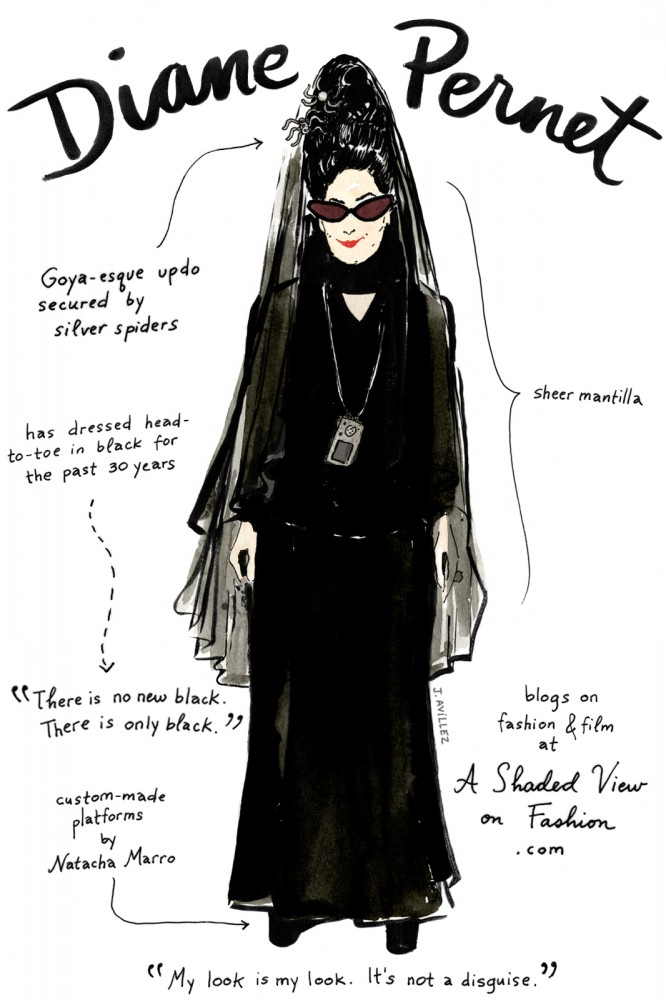 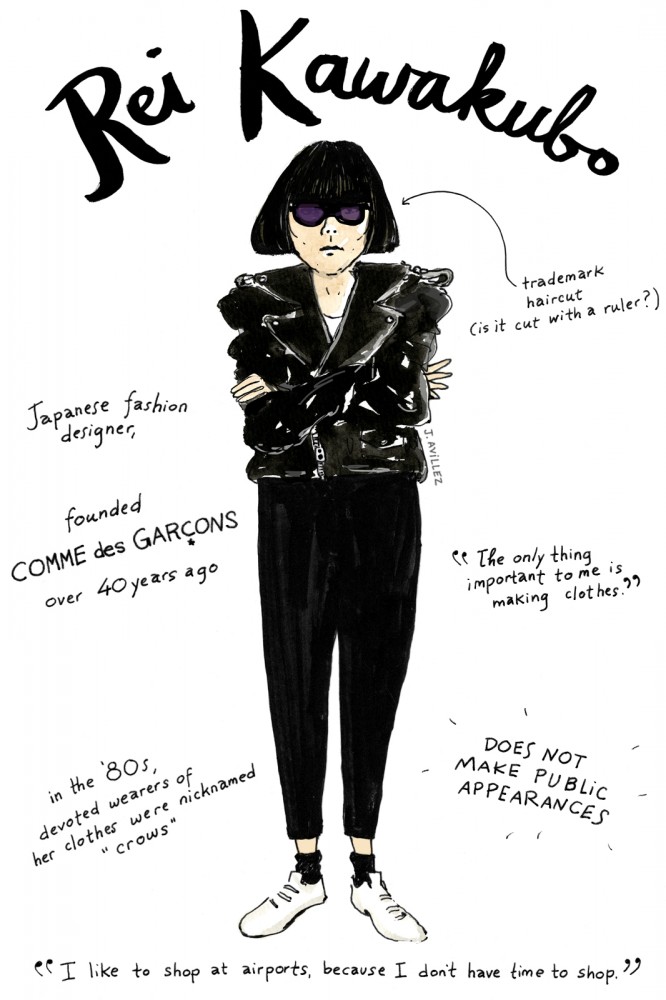 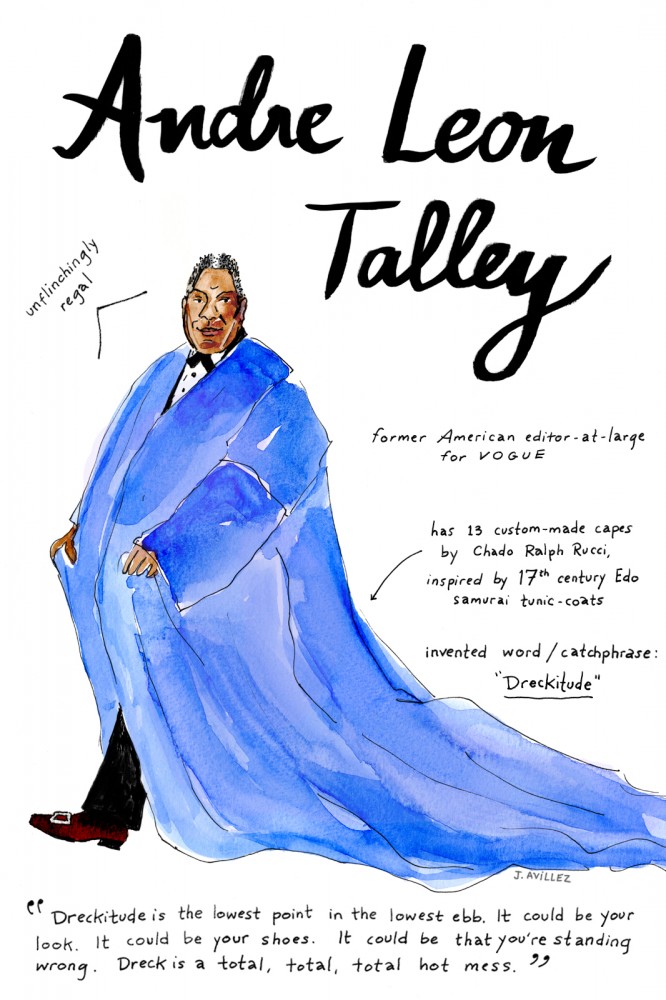 Who doesn’t love a good diorama? This is one we made today using a French template from 1934  - “La Vieille Russie”  or “The Old Russia” (via pillpat). Print, cut and enjoy! Gutzon Borglum and the making of Mount Rushmore

Could you pass the civics portion of the United States Naturalization Test? [Answers are here.] Ms. Simon’s full collection of photos from this series (over 1000 images) are featured in her book titled Contraband.